Sometimes I must be jinxed and one felt exhibition chases the next. This week I visited two exhibitions. I already wrote a blogpost about the first one in the Alte Spedition in Gladbeck. The other one can be marvelled at in Helsinki, Finland, from 03 June to 31 July 2019.

How can that be? You as smart readers probably think so. She posts the post on 2 June and the exhibition will be on view from 3 June? How is this suppossed to work? Dear felt enthusiasts, I have come to enjoy a preview of this Finnish exhibition and would like to tell you about it. It is, so to speak, a small German-Finnish felt encounter. For that I have to go far afield…

City trips are fine. Seldom has it been possible for me to explore and experience so many new things in such a short time, to gather and process new impressions, to immerse myself far away from everyday life into another world. I can identify 100% with the following saying about traveling:

„Traveling – it leaves you speechless, then turns you into a storyteller.“ – Ibn Battuta

So I was curious about a new country when I left for a city trip to Helsinki. I already visited Norway, Sweden, Denmark and Iceland, and particularly like Nordic countries. Now it was Finland’s turn to play.

Well, that’s not really true, of course. Don’t get me wrong! Of course, if you have traveled to Helsinki, you cannot say you have seen Finland. If I have seen Berlin, I do not know Germany. But with the visit of the capital a Finnish beginning was made. After all, there must always be something worthwhile to come back to.

But, dear felt enthusiasts, what about my waffle about traveling when it’s supposed to be about felting? After all, you ended up on my website and on this blog to find out something new about felting and not to read a travelogue on Helsinki. Don’t worry, I’ll get right to the point now.

In preparation for this trip to Helsinki, to which I dedicated a lot of time, be it sightseeing opportunities, opening hours, food offers and transport conditions, I came across the Design District Helsinki. I knew that Finnish design plays a major role, as I was able to name several Finnish design brands even before my trip. I also found out that a lot of handcrafted and handicraft goods are being marketed and found that very appealing.

So I came by chance to the website of Craft Corner Helsinki and learned that one day after my departure an exhibition of the Finnish Felt Association would start. The exhibition „Felt for Tomorrow“ was shown on the occasion of the 20th anniversary of the Finnish Felt Association in the Craftcorner Taito Gallery. Previously, it was shown at the Craft Museum of Finland in Jyväskylä. A report about it can be read in the current Filzfun, a magazine for the German-speaking feltmakers‘ community. 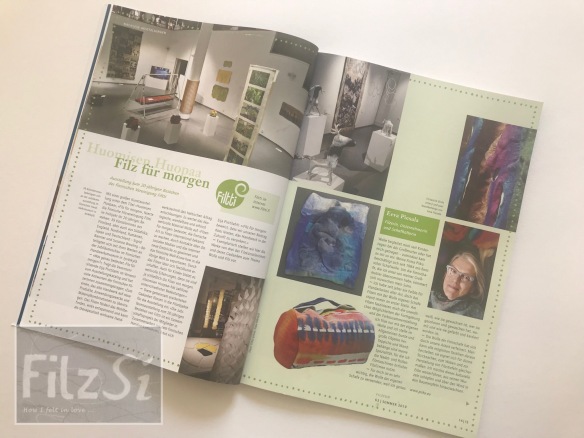 On the website of Craft Corner the contact to Sirpa Mäntylä was printed, so I spontaneously sent an email a few days before my departure and wished her all the best for the exhibition. Promptly I received an answer AND an invitation to view the exhibition in the gallery in the Taitu shop on Eteläesplanadi boulevard two days before and get to know her in person.

Of course, I accepted this offer and was very excited to take advantage of this unique opportunity. As a small souvenir from Germany I felted the olive lavender bag, which you already know from the previous post. Do you remember?

In the gallery Sirpa received me very warmly with a hug. How nice, I thought, felters form a unique community around the world.

She led me through the exhibition and showed me the exhibits that were already hanging on the wall. In the photo above you see the current look. Partly the fine plates with names and titles were missing and here and there the finetuning, there was a ladder in the back and some exhibits were waiting for hanging the next day. Nevertheless, Sirpa offered to take pictures and started to explain some of the exhibits. It was great that I could look at everything, even though it was not yet perfectly prepared for the vernissage.

The tour started with the non-Finnish members of the association. Among them were familiar names like Susanne Breuling or Sigrid Bannier or Caroline Merrell. Sirpa and I quickly started talking about the felt courses I attended, e.g. with Sigrid Bannier two years ago at the Filzkolleg in Düsseldorf and we talked about the importance of felting in our lives.

In Finland, years ago, as in Germany, there was even more interest in felting, she said, but in the meantime, more and more people wanted to see and touch felted stuff and take courses. It seems to me that Filtti is very active and organizes several exhibitions a year. Sirpa explained that there is an annual exhibition in Jämsä, in central Finland, which I should definitely visit when I come back to Finland.

My favorite works at a glance

Sirpa had a small story ready for each exhibit and knew the backgrounds of the feltmakers. I was astonished by the incredible variety of techniques and objects, not to mention the variety of colours I was able to experience. Even careful touching was allowed to check the firm felt quality. Do you also experience the need in felt shows not only to see the exhibits with your eyes, but literally to touch with your hands? Can you imagine how much inspiration I got in this short time?

Here are a few photos of the exhibits that impressed me most. I have inserted and linked the titles of the works and the names of the artists, if possible.

This large wall panel by Kaija Paltto is called „The wise advice of the ancestors“. The artist processes Finnish sheep’s wool and refers to the ancient traditions and materials of the Lapp and Finns that she uses in her felted objects. She lives in Lapland, Northern Finland, and is married to a Sami.

The colorful pendant of Anne Ohra-Aho is called „Scheema“ and spreads a good mood. The contiguous areas form a certain regularity, which is interrupted by the loose connections between the elements. It is also nice to observe the shadows on the wall, as the pendant was installed as a free-hanging object. 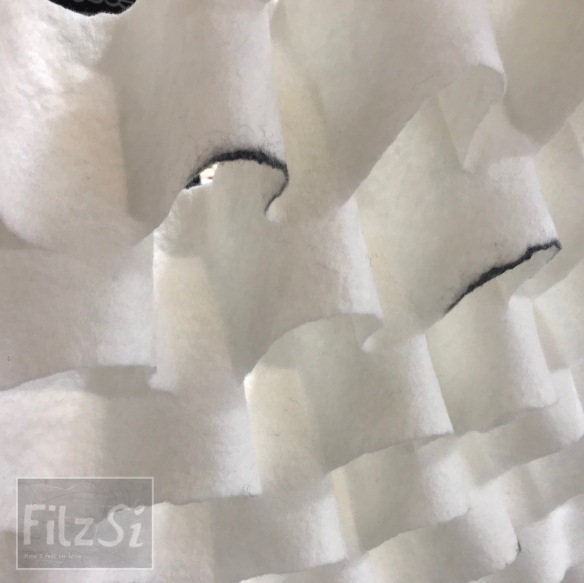 This airy, easy-going work by Kikka Jelisejeff with the title „Herd“ has a fantastic felt-like effect and I also like it a lot. I imagine that the vaults can be sheep, some of which are black. What do you mean? Which do you associate? 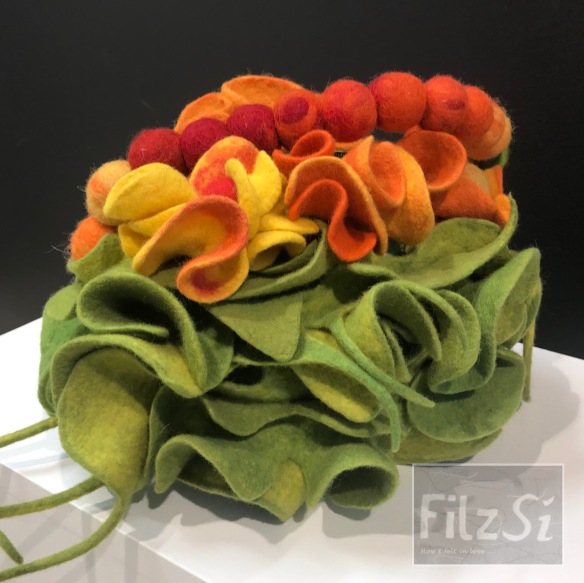 Wow, what a felt power package! This is a bag that can be worn over the arm or in the hand. The red balls form the handle. It is – as the photo proves – also a wonderful design object that spreads already joy when watching. Mari Jalava appropriately calls them „joy and happiness bags & love baskets“. Anyone traveling with them will be noticed, and wants to be.

The next object that I particularly liked is connected to the title of the show. The exhibition is called „Felt for tomorrow“ and means that felt and wool still play a role today as a traditional and old material, and can also be found in modern everyday objects. Here, in the window of the gallery, you can find three curtains entitled „Flight“ designed by Sirpa Mäntylä. The birds and the transparent fabric symbolize a fine lightness; this impression is reinforced by the lateral fringes and the pattern.

The last object, a picture by Heidi Halm, is titled and radiates the word „joy“. Heidi writes in the exhibition catalogue that both crafts and gardening are good for the soul. How much she is right and also hits my nerve! Her image radiates a harmony with body and soul. The pastel color scheme blends into the overall message of the picture and makes the dancer look graceful.

Looking at the exhibits, I told Sirpa that in Germany, especially where I live, there are not so many felt shows, and if so, they are much smaller than this one. It is often left to chance to be informed about exhibitions. How I like to remember the exhibition of the Finnish Felt Association in Wuppertal, which I visited almost exactly four years ago. Already there I noticed the colors and the variety of the exhibits and the love of wool. I remember exactly my entry in the guestbook. Also in Helsinki, I wrote into the guestbook, the first entry, even before the exhibition started. A major honour! Sirpa jokingly said that my entry could be understood as a kind of inspection by the European Union. It is hard to believe that Finland only became a member of the EU in 1995.

Look, two feltmakers among themselves. One with a felted pendant, the other with her felted mobile phone case. Sirpa gave me the catalogue of the exhibition and a package of beautiful, lovingly designed postcards that were printed especially for this exhibition and show details of felt exhibits. For the exhibition in Helsinki Filtti had to make a selection and find a compromise, because the showrooms are smaller than those in central Finland.

After the tour of the exhibition, Sirpa invited me to tea and canapés at a fancy Helsinki café. Hmm, that was

I asked her what she appreciated most about Finland. Without much thought, she answered that it was the different seasons, in particular the transitions between spring and summer as well as autumn. That is so special in Finland and very different than e.g. in the north of the US, where she used to live. There are very cold winters and hot summers without the mild transitions as in Finland, which she appreciates.

In fact, I was able to confirm that during my short stay in Helsinki. The trees had a rich, bright green that no photo of this world could cope with, and it was pleasantly warm in the sun, cool in the shade, but not cold. The sun spoiled me on all three days, each with over 15 hours daily. The pastel sky late at night reminded me of that of northern Iceland last summer. As if someone had swung a brush to start a painting. 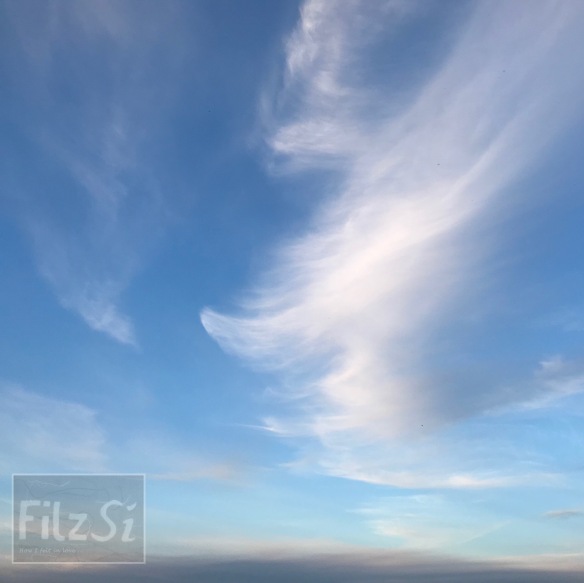 Full of new impressions and inspiration for felting and my desire to continue to document many felt exhibitions in Germany and internationally, I flew home and will think back for a long time to this special felt encounter. Kiitos, dear Sirpa! This is the Finnish word for „thank you“. 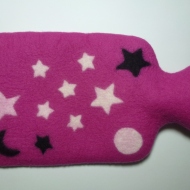 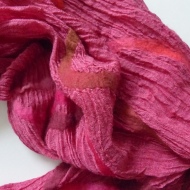 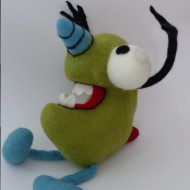 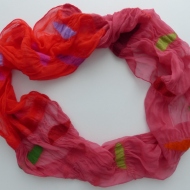 Follow FilzSi – How I felt in love… on WordPress.com
Lade Kommentare …
Kommentar
×